The Order Grid Trading Simulator is a special tool to simulate trading based on historical trade price data. The simulator allows you to test the following grid parameters:

The simulator is available by clicking the «Simulator» button 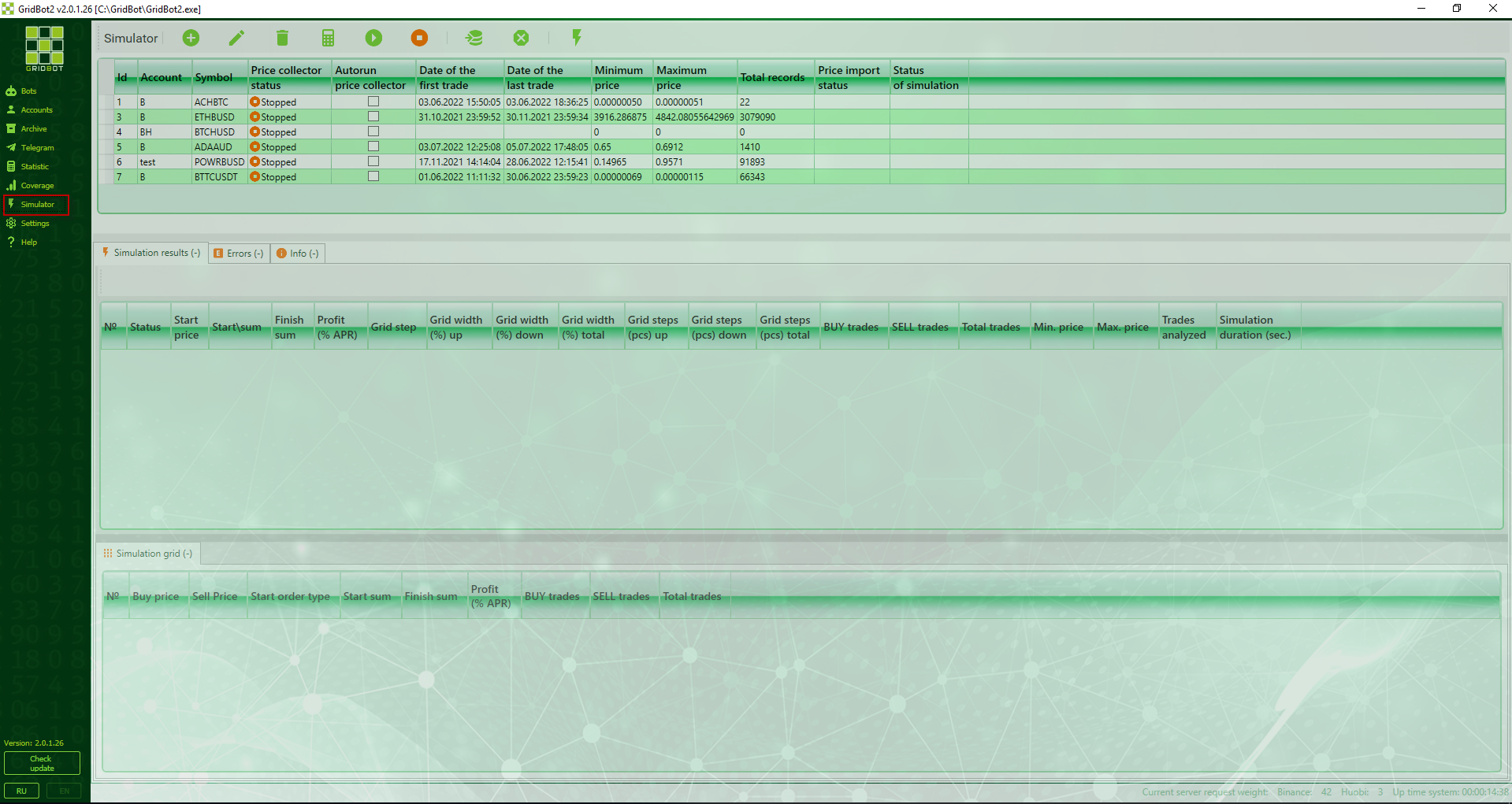 The simulator window consists of 3 parts:

Consider the part of the window with the list of simulators:


Adding and changing a simulator

When adding or changing a simulator, you must fill in the fields in the window: 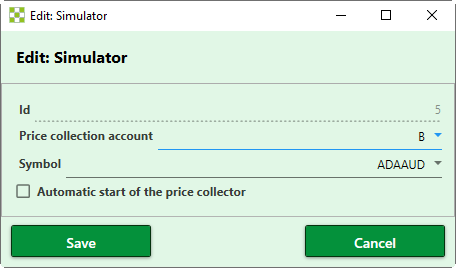 After each saving of the collected prices to the database (every 30 seconds) the statistics is recalculated. The price collector collects only current prices of trades at the exchange the history of prices is not loaded, the exchange provides historical data on deals only in the collapsed form. If for some time the price collector was not working, then there will be a gap in prices, which is not considered in the simulation - as if there was no gap, but there is a big time lag between deals. For more accurate simulation, it is necessary for the time series of prices to have as few gaps as possible.

Prices are saved to a separate database, which is located in the same directory as the GridBot2.exe application executable file and is called Prices.db. The format of the database is SQLite. Note that the Prices database can be very large, so make sure that the application directory is located on a disk with sufficient free space. When you clear the price data of the selected simulator or delete a simulator, the size of the database is automatically reduced by the deleted amount of data.

It is possible to simultaneously collect prices for any number of trading pairs. Restrictions can be only on the part of an exchange. Rules and restrictions of exchanges are regularly updated.

An alternative to collecting data on prices - is to import from a database purchased from the store https://www.gridbot.info/en/shop/allprices
The format of the database - SQLite. To import, select the desired simulator and click on

, then select the database file from which you want to import data. If the database structure corresponds, the selected data on the simulator's symbol will be copied into the database of simulator prices. The import is performed in the background mode and the status of the import procedure can be checked by the column "Price import status".

Simulation of trading using a grid of orders

To start the simulation, press the button

, the following window will open: 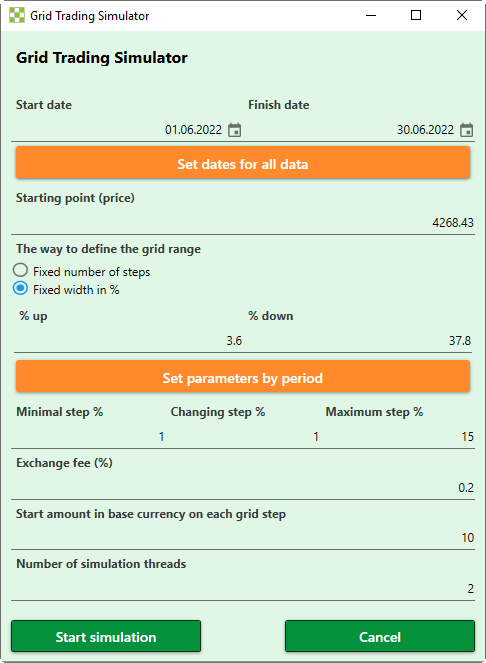 In this window you must set the following parameters:

The middle part of the window displays all simulations that have been run: 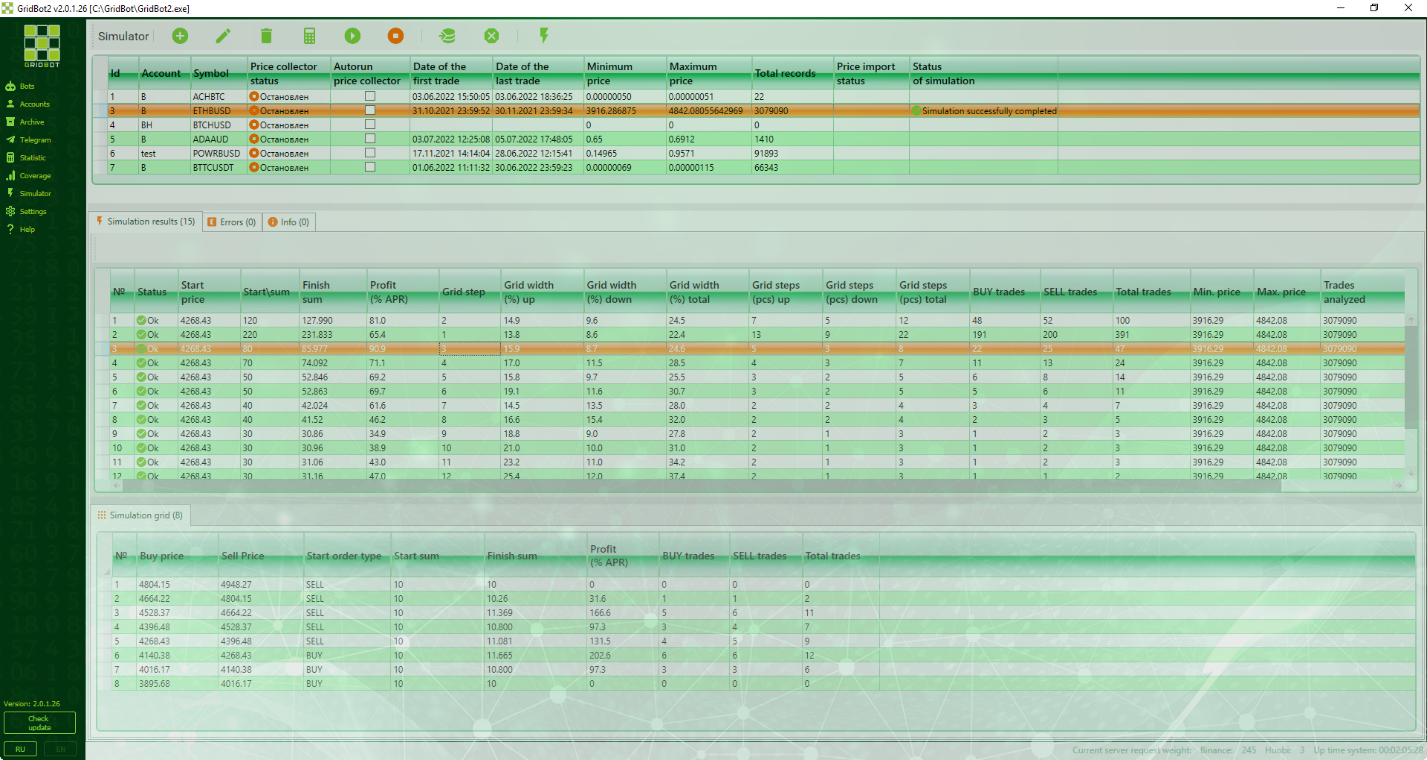 Column composition of the middle part of the window:

The bottom part of the window shows the statistics of the grid the simulation was performed on. It is necessary to select the simulation of interest in the middle window to display its grid.

The composition of the columns of the grid statistics, is as follows:

Features of the simulation algorithm

It should be taken into account that in the simulation, all of the data on prices is selected in the RAM. With a large number of deals, the use of memory can be significant - tens of GB. In order to reduce memory consumption, it is necessary:

The number of threads does not significantly affect memory consumption.

It is not recommended to indicate the number of threads greater than the number of logical threads supported by your CPU. It can lead to slowdown of your computer.

It is important to understand how to interpret and use the result of the simulation. The following theses can be highlighted: